Searching for the perfect wave with Loewe

Surfing in Ericeira with Miguel Blanco and Gony Zubizarreta 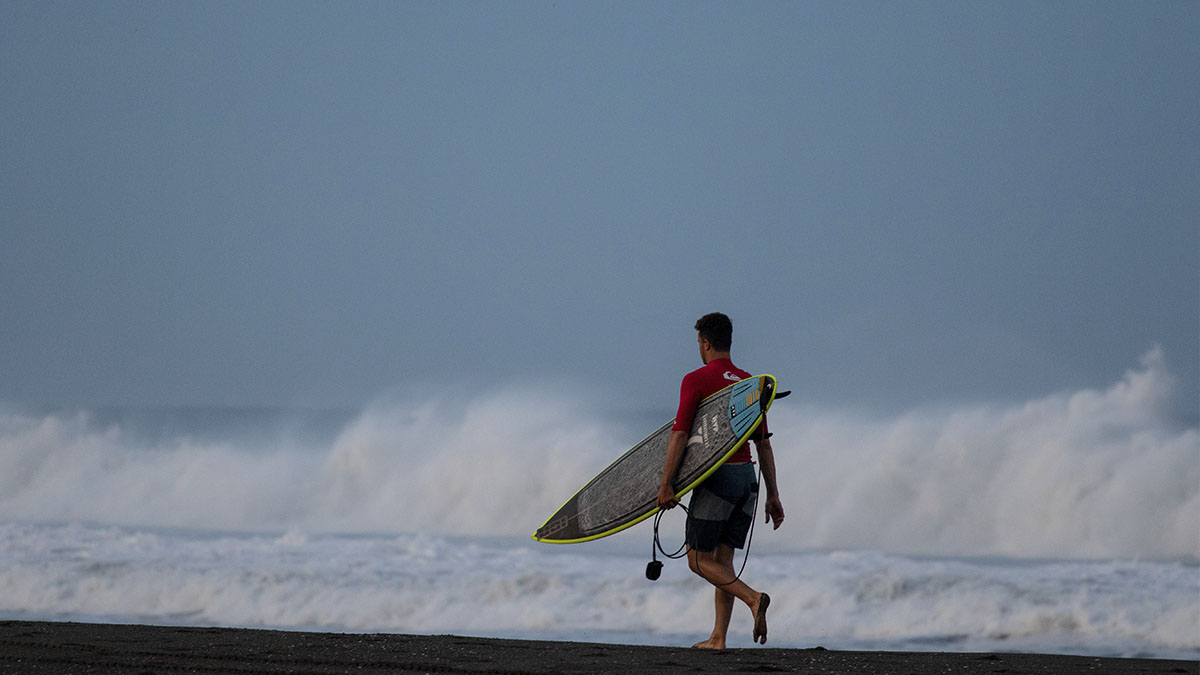 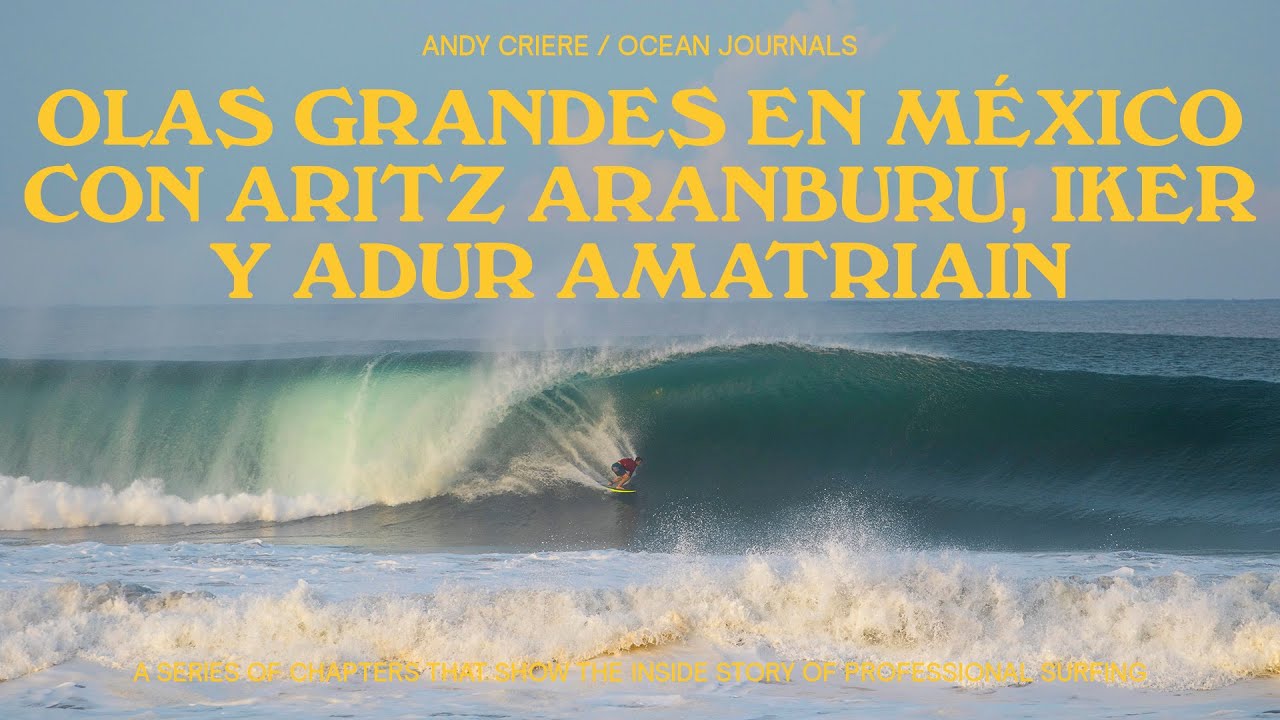 When I embarked on this adventure I never thought the trip would be so wild. Whenever I embark on a last minute adventure like this one, it’s always a challenge that allows me to grow as a surfer, but what I didn’t know was what I was going to go through there….

You may ask, where there, there in Mexico! A country that I had to visit and that I dreamed of visiting. I’m going to start at the beginning… One fine day Aritz Aranburu called me to ask me if I would like to go to Mexico with him and the Amatriain brothers because there was a good swell coming and we had a week before a championship. You may be wondering when we had to leave, and of course, the next day… I was in Portugal at the time, with friends, and having a great time, to be honest. But I couldn’t turn down such an opportunity, I was sure of that, and as soon as I got the call I hung up to discuss the feasibility of this trip until I felt that I had to do it, that something good was waiting for me there. The next call I had with Aritz was to organise the flights and we agreed to meet there as we would have different itineraries.

After making the decision and buying the tickets, the only thing left to do was to prepare the equipment I was going to take with me on this occasion, which would be one of the most challenging wave rides I’ve ever been on. This was a serious thing and I knew it, I also knew that I didn’t have all the tools to face it, that’s why I called my friend Gony Zubizarreta to ask him if he had a Step Up, that is to say, a longer board, to use in this trip. To this, good old Gony replied that he only had a magic board, 6.9, but that he would be happy to lend it to me and make me some tubes with it. I can assure you that this defines a person, the generosity of having a magic board, of having lived great moments with it. And yet to lend it to a friend so that he could put it in the water in conditions where the slightest mistake could cost the board. We met and as soon as I saw it I knew it was the board. And I wasn’t wrong… 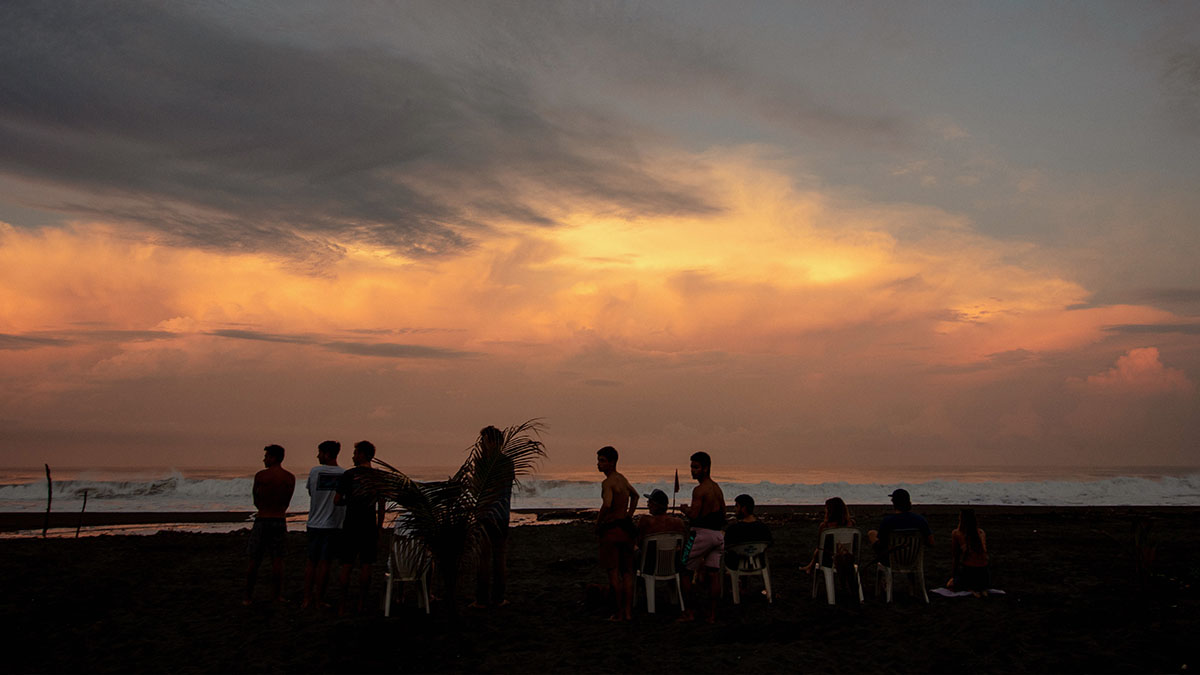 The next day my girlfriend Carmen dropped me off at Lisbon airport and the adventure began. It was strange for me to travel long distances again and the truth is that it is quite uncomfortable as there are many restrictions and rules that make it very difficult to travel smoothly. Even so, everything went well and I managed to reach my destination within a day’s journey. I was finally in Mexico, for the first time in my life, and Aritz, Adur, and Iker were there to pick me up, with the boards already on the car and ready to head for our final destination, which was three hours away from Guadalajara airport. I was very surprised that it was cold in Guadalajara as I had in mind the hot Mexico I have seen in all the surfing videos. 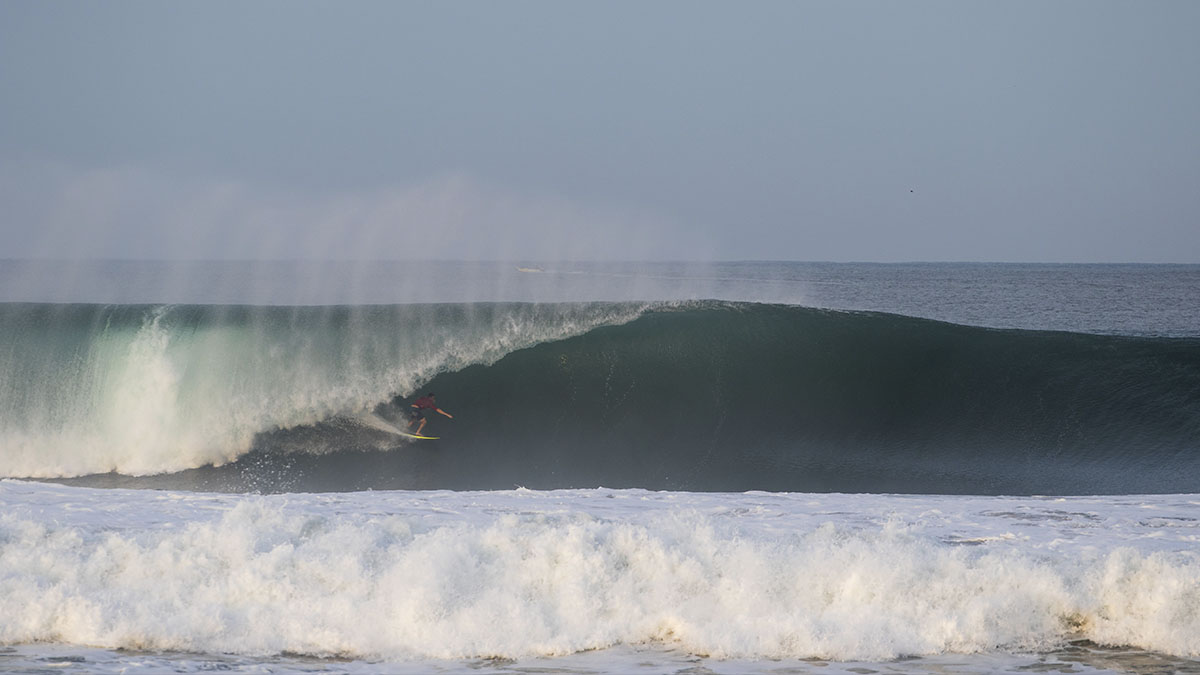 We arrived without any problems, and after a good night’s rest to relax after the trip we enjoyed some nice conditions before the swell arrived the next day. This place where we were was characterized because the wind was good for surfing in the morning but around 12 o’clock it got bad, so we had all the afternoon to rest so we dedicated ourselves to look for a jet ski that could give us assistance on the big day.

Finally, with a lot of optimism and a lot of help from the locals, we managed to get the bike ready, albeit with some slight faults, to put it in the water the following day. If I told you how the story started in life you would have thought that this bike would have worked at some point. But I want to believe that thanks to our optimism we found the solution, destiny must have known that it was going to be of great help to us? 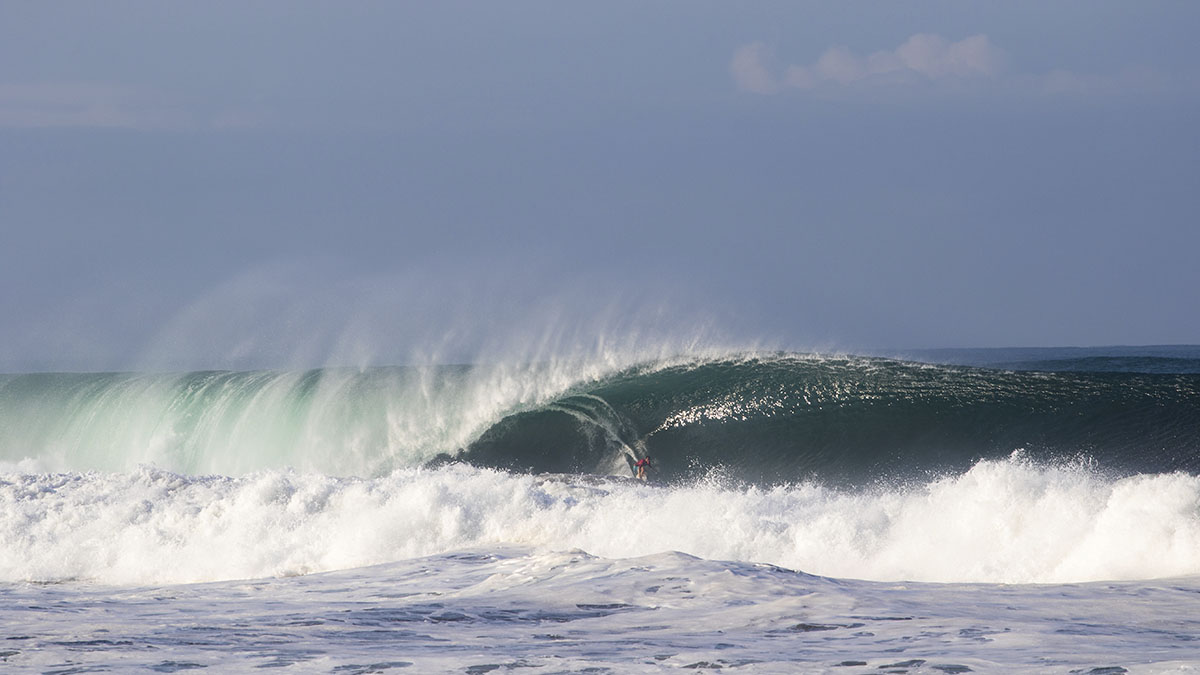 Finally, the day of the swell arrived, there it was, what we had been looking for on this trip, we had it in front of us.

The sea was roaring with all its might, it was perfect, big tubes and siphons everywhere, it was big and gave us a lot of respect, but we had the desire for adrenaline, to face that sea with all the respect in the world and with the desire to experience strong emotions. After trying to start the bike and to the amazement of all of us who were there, the bike started, and the first one to enjoy the big waves with Aritz at the wheel was Iker, who got the biggest siphon of his life on the first wave and it was just dawn. The second wave that came in was also great, and that’s when Aritz came to pick me up, it was my turn, I had to try my luck. I was excited but at the same time, I was really scared because I had never done step off from the bike and even less with that size of waves. It was dangerous, any wrong move could have been serious.

Before the arrival of a wave that looked good we decided to go for a ride on the bike and at that moment something inside me stopped me, I didn’t see it clearly and I asked Aritz to wait. Then he rightly told me that maybe we were waiting for something that wasn’t there, and then the series came behind us, and we saw the wave we were waiting for, and there it was, that clean and perfect wall with the light of dawn shining on it, I knew it was it, Aritz knew it was it, and he put me on the spot to hit it. I will always remember the moment when he told me: NOW! At that moment I jumped on the wave, stood up, and had the best vision of my surfing life so far. I started celebrating when I saw that the wave was getting ahead of me, then a gigantic siphon came out, which blinded me for several seconds, and when I saw it again the wave accelerated too much. Then I jumped in and thought, “god this wave is going to rip me apart”. It actually went pretty well for the size of the wave, and by the time I surfaced, there was the next giant wave crashing down on me. Again I thought the same thing, “god this wave is going to hurt me”, but once again everything went great and Aritz was able to come and get me out of the situation. It was crazy, it was awesome!

Once the day was over, we were all freaking out about the waves we had caught and the emotions we had experienced. The next day the sea was going down, but no one was going to tell us that it would be even more intense than the first day. The next day dawned perfect but smaller and much tidier, that’s why we decided to paddle in. Remember when I was talking about that board that Gony Zubizarreta left me? Well, the first wave I took with that board I got one of the best tubes of my life paddling in a very big wave with a lot of mass and perfect.

It was this day when a few hours after we got into the water there was a horrible accident in which Carlos Di Pace, a legend of Argentinean surfing had a very bad fall in a big series wave and as the series went by we saw that he could not get to the surface. When I saw this I went as fast as I could to him or rather to his board. We did our best to get him out of the situation as quickly as possible. He was unconscious at that moment and as we pulled him to the shore we resuscitated him until the ambulance took over and unfortunately there was no way to bring him back. It was a very sad situation for the whole international surfing community. I would like to think that Carlos was doing what he loved doing and like all of us, we are aware of the risk we are exposed to in conditions like these. May you rest in peace Carlos, and my sincere condolences to his family and my Argentinean friends. 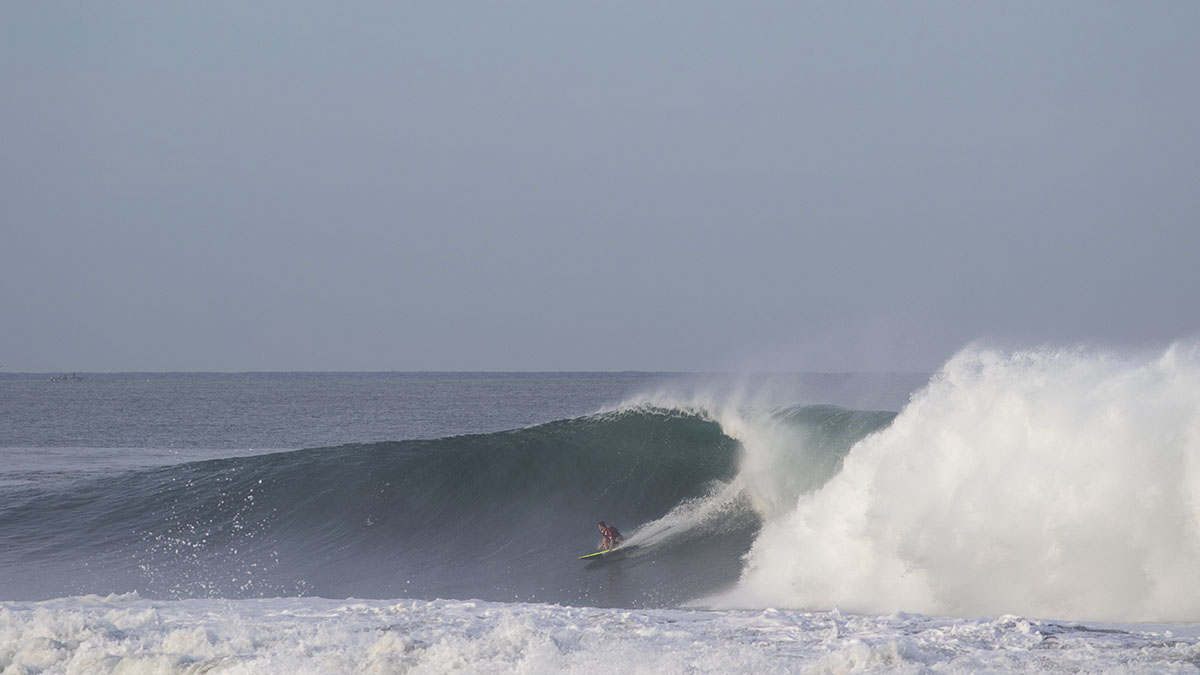 It has been a trip that has been incredible growth in all aspects and of course, this is one of the great richness of travelling. Thanks to the locals for sharing their waves, to all those who helped us so that we could surf safely there, especially Carlos and of course Aritz, Adur, and Iker for the great trip!